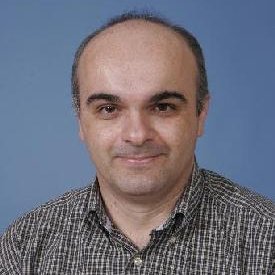 Since the dawn of the space age, we have become increasingly dependent on a reliable forecasting system for solar activity, says FLARECAST project coordinator Dr. Manolis K. Georgoulis. He is one of the few solar physicists worldwide specialized in flare prediction. In this interview, he explains how explosions close to the solar surface – flares – can affect life on Earth and why it is important to gain a better understanding of the physics of the Sun.

Dr. Georgoulis, what exactly is a solar flare?

A solar flare is a sudden explosion taking place close to the surface of the Sun. The sheer energy of such an explosion is typically between 1 and 10 billion times the energy liberated during the atomic-bomb explosion of Hiroshima. The largest solar flares can have ten times more energy than that. There are also much smaller flares that we call microflares or even nanoflares. Still, these “small” events are hundreds of thousand to several million times more energetic than the Hiroshima bomb. A flare is recognized by its emission that covers the entire electromagnetic spectrum, from gamma-ray to radio emission. We know about solar flares for less than 200 years, after the first flare detection of September 1859. However, we have yet to understand completely how are solar flares triggered and we are still making our first reluctant steps in predicting these giants.

Are solar flares dangerous for us?

The largest conceivable solar flares could entirely sweep the atmosphere off a planet. These are extremely rare events, however, and we are fortunate to have Earth’s magnetic field playing the role of a shield of our precious atmosphere. Most flares, even large ones, do not pose an immediate threat to life on the surface of the Earth. This can change with humans beyond the atmosphere, either in orbit onboard a satellite, or possibly en route to an interplanetary trip to the Moon or Mars. Besides electromagnetic emission that can be harmful to humans, solar flares spew huge amounts of plasma (ionized matter, mostly in the form of electrons and protons) that can be harmful, either disruptive or destructive, to both astronauts and electronic infrastructure in space. Very large flares certainly cause disruptions, or even damage, to long-distance electrical-power grids of countries closest to the north and south poles. They pose health risks to passengers of commercial airplanes flying close to the Earth’s poles. A global consequence regardless of geographic latitude, is the disruption of GPS services. In all, our dependence on an accurate advance knowledge of solar-flare activity has grown tremendously since the dawn of the space age.

Your research team is developing an automatic forecasting system for solar flares. Who needs to know in advance when a solar flare will occur?

Some key stakeholders can be identified immediately: space-faring nations and their governments, airline companies, GPS-reliant service providers, the military, and major electrical-power grid operators. These practical beneficiaries aside, the global solar- and space-science communities have vested interests in making progress in the flare-prediction front because this can lead to groundbreaking advances in understanding our home star, the Sun.

Will the public soon be able to watch space weather forecasts on TV just like weather reports for the Earth?

One could think of this, indeed, but a question is “how soon is soon”. Experimental efforts for space-weather bulletins, a central part of which is solar flares, are already underway in the world wide web. However, it is the accuracy of these forecasts that we have to work on. There is a game-changing difference between terrestrial-weather and solar-flare forecasts: satellite imagery can nowadays help monitor the changing weather patterns as they traverse above different parts of Earth. If we are in Europe, we pretty much know what is coming from the Atlantic ocean and how this will affect us. This is not the case with solar flares: we pretty much know where they are coming from in the Sun but, because of their explosive nature, we know neither when / whether they will be triggered nor how strong they will be. One can always report on what is on the Sun as we speak, but it is very hard to risk a flare prediction within a practical window of a few to 24 hours.

Will your forecasting system be more reliable than the existing ones for Earth weather?

I do not think that one can claim an easy answer to this question at this point. The reasons are both practical,  depending on how closely and accurately do we monitor solar activity, and scientific. To the practical side, we ideally need solar observations 24/7 by multiple space-based platforms at different vantage points, not necessarily on Earth’s orbit. To the scientific side, we have yet to understand whether flares are deterministic events,  that is, whether they will happen at a certain time with a certain intensity, or stochastic events, that is, featuring an element of unpredictability. My view so far is that solar flares are largely stochastic events. They are not random, such as the flip of a coin, but they involve stochasticity, nonetheless. It remains to be seen how reliable our forecasts will manage to be, and it will be this reliability that will ultimately judge the success of our project.

The project is funded by the European Commission’s Horizon2020 framework programme. What is Europe’s interest in forecasting solar flares?

Just a glimpse on who cares about a reliable solar flare forecasting, answered above, will reveal that the European Union is a major stakeholder. The Union has a sturdy space programme, via the European Space Agency and various national space agencies. Europe extends geographically all the way to the realm of the Arctic circle, which makes several nations vulnerable to the repercussions of major solar flares. Europe builds its own satellite-navigation system (Galileo), that is an improvement of the USA-run GPS. Europe has scores of sizable private companies and SMEs that are currently GPS-reliant and will be Galileo-reliant in years to come. Last but certainly not least, Europe has its own robust solar and space physics community that would be very much benefited by a successful, tested flare forecasting service.

What do you hope to achieve by the new forecasting system FLARECAST? What is particularly interesting from your point of view?

One will probably get different answers by different consortium partners in this question. The FLARECAST consortium is diverse: it encompasses solar-activity professionals, cutting-edge modelers and artificial-intelligence experts, governmental organizations, education and public outreach specialists, and hardware / software analysts, all guided by an external steering committee of experts in all these fields. We strive to showcase that such a large-scale pluralistic effort can actually bring true progress to a problem that has yet to be tackled satisfactorily by humanity, in spite of intense efforts. To me, a solar physicist, FLARECAST will be the ultimate exercise on how far we can go in understanding our Sun: an object of study that we can only see but not touch or experiment on in the lab. FLARECAST, with open results to anybody worldwide, can also mark Europe’s leading contribution to a cornerstone science problem that also has immediate, day-to-day consequences to humanity’s wellbeing.
It is an immense honor to coordinate this effort and will make every effort to make sure that European taxpayer funding is exploited most efficiently in the project’s framework.

Dr. Manolis K. Georgoulis works as a senior researcher at the Research Center for Astronomy and Applied Mathematics (RCAAM) of the Academy of Athens. The interview questions were asked by FLARECAST public outreach coordinator Hanna Sathiapal.